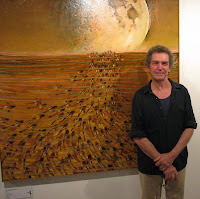 Maleny artist Peter Hudson has beaten a field of top Australian artists to scoop this year’s Sunshine Coast Art Prize with a highly emotive oil painting of fish surging towards a moon rising over the ocean. This is the first time a Sunshine Coast artist has won the prestigious national art prize, beating 39 other outstanding finalists from around Australia with his entry that was described by judge Phillip Bacon as “an arresting image, very beautifully painted and one of this local artist’s most mature works”. Before this win, Peter was already on a wave of success with his art developing a growing following, including being named a finalist in the 2007 Archibald prize. He described his winning SCAP painting, entitled Law, as breaching the divide between the natural and human worlds. “Sadly modern humans are losing their consciousness and their connection to homeland,” he said. “The painting Law is a reminder of scale, power, beauty, deep mystery and living in hope that all will be OK.” Judge Phillip Bacon said he chose the winning painting, which will be added to the gallery’s permanent collection, because: “The ebb and flow of human consciousness, indeed of human life, emanates from the canvas. “I think this work is a worthy addition to the permanent collection, and I congratulate Peter Hudson, indeed all 40 finalists, for making this a particularly strong exhibition.”
Posted by Ken Munsie at Sunday, August 30, 2009