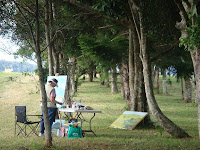 Following on from the May plein air weekend with tutor Peter Hudson at Wendy's fabulous property at Booroobin - overlooking the Glasshouse Mountains - an exhibition of the paintings are now on show at Maleny Artworks Gallery.
Artists exhibiting are Charmaine Cameron, Gina Davey, Hetty Doyle, Josef Lanc, Sonya Makaroff, June McCotter, Stephanie Mclennan, Kath Nash, Danni Oliver, Larian Sloan and Ginty Stockings.
If you cant make the gallery, the work can be viewed on the Maleny Artwork's website - http://www.malenyartworks.com/ - follow the leads to current exhibition plein air.
The weekend was a huge success thanks to the generousity of Wendy, the teaching skills of Peter, the amazingly perfect weather, the spectacular views of the Glasshouse Mountains and of course the 10 talented artists attending (see pic below). 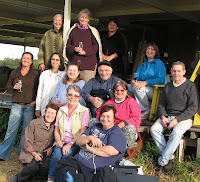 Congratulations to all COMA members who submitted works to the 2009 Maleny Art Awards held over the June long weekend.
Local winners were Diane Somers-Cook - 1st prize watercolour + Anne Atkinson - 1st prize contemporary abstract + John Morrison - 3rd prize traditional oils/acrylics + Gary Myers - 1st prize traditional oils/acrylics + Heather Jones - 2nd prize Australian native fauna - Jan Scullion + 3rd prize traditional pastel ...
Many other COMA members had works hanging - and I must complement Pat Cale, Sue Gilmour and Audrey Raymond - for 3 paintings that were definite show stoppers.
And featured 3D artist at the show was Meike van Sambeeck's stunning pottery.
This is the 16th year the Anglican Church of St George's has run the show - it's a hard show to appreciate visually - with so many entries in such crammed hanging space and such a variety of subjects and standards - but the organizers have done a sterling job with what they were given - and the committee must be congratulated.
Competition judge was Bree Richards and the champion of the show is "Let's play Horsy" by Amanda Russian.
Posted by Ken Munsie at Sunday, June 07, 2009 No comments: 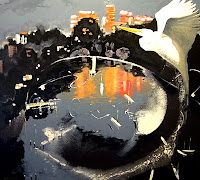 About 80 guests attended the opening of the Birds Exhibition at Maleny Artworks on Saturday night.
The exhibition is a collaboration between Sydney artists brothers Warwick and Neil Heley and Caloundra artist John Waldron. John is also the Director of Caloundra and Noosa Regional Galleries.
The three attended college together and have worked together on art projects on and off for the past 28 years.
Just over 20 years ago they experienced Whiteley’s Raper Street studio exhibition Birds. The beautiful exhibition had a significant impact on the three and since then birds have featured in many of their collaborative paintings, drawings and sculptures.
The Birds exhibition, is a homage to Whiteley as well as presenting the observations and stories of the three artists. The exhibitions of individual and collaborative, drawings, paintings and prints explore the beauty, intellect and playfulness of birds and birds as metaphor and omen, for good and bad.
The three share a fascination for birds, which has been passed on through their families. Each has childhood memories of time with their fathers and older brothers on the hunt for bird’s eggs and birds. Their fathers were considered ‘birdsmen’ by their families, because of their close connection with birds and the time they spent feeding and observing their behavior and life patterns.
This exhibition runs through June and Maleny Artworks Gallery is open Wednesday to Sunday. Images of the works on show can also be viewed on the Gallery website - www.malenyartworks.com . 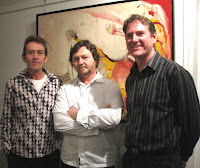