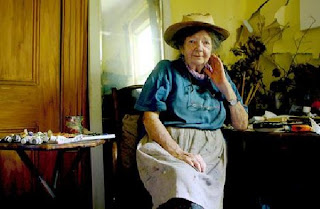 Australian Artist Margaret Olley found dead at her home in Sydney ...
Tuesday 26 july 2011 - article by Isabel Hayes
Margaret Olley was not afraid of dying and her death in her own home was "the perfect way to end", her protege says.
Ben Quilty, the artist who portrayed the still-life painter in his award-winning Archibald prize entry this year, said he was "devastated" at the loss of his friend and mentor. 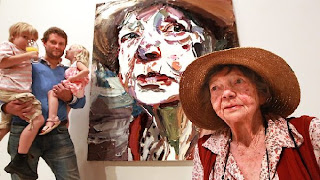 "I just spoke to her last night. She was her normal, bright self," an emotional Quilty told AAP on Tuesday. "I was going to see her tomorrow."
Olley, 88, was found dead at her home in Paddington, in Sydney's inner east, early Tuesday morning. 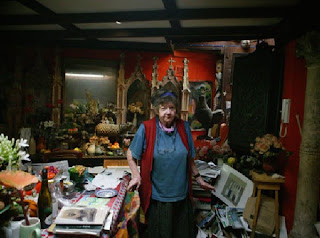 "It was the perfect way to end. She would have hated being attached to a machine in a hospital," Quilty said.
"Instead, she was in her home, her haven, I can't imagine a better end to her life."
He described Olley as a "modern, contemporary lady", tough and at times brutally honest, who just "wanted people to strive to be better". 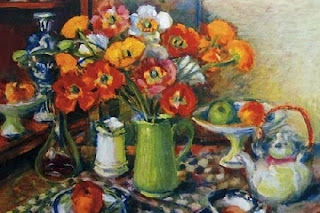 "She was never fearful of death," he said.
"It was never a topic she shied away from. It was physically obvious to her that this was something she was about to deal with and she dealt with it with such grace."
NSW Art Gallery director Edmund Capon described Olley as "one of the most unforgettable people" he had ever met.
"I have never met anybody so rarely passionate, committed and yet always retaining a wry sense of the absurd that life inevitably presents to us," he said.
"She was probably the most politically incorrect person I knew. Margaret Olley brought a new dimension to the word individual." 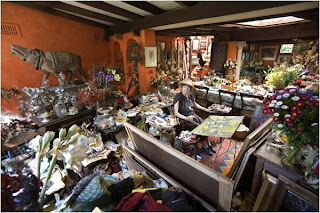 Mr Capon said Olley was a true painter - "there was absolutely no other career for her" - who found beauty in humble things such as a bowl of fruit or flowers.
"We often talked about colour and what was her favourite colour. Her answer was swift and straightforward: 'green', she would say 'it's the colour of rebirth'."
Born in Lismore on June 24, 1923, Olley began painting as a girl at Somerville House boarding school in Brisbane, going on to become one of Australia's most respected still-life and interior artists.
She was also one of the country's most generous benefactors to public galleries, including the Art Gallery of NSW and the Museum of Contemporary Art, and she held honorary doctorates from Macquarie, Sydney, Queensland and Newcastle universities. 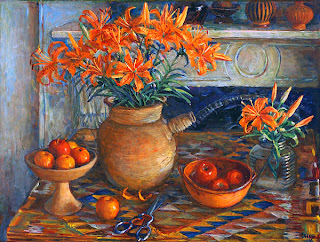 "She was the last of a generation of empowering figures in Australian art," said Professor Colin Rhodes, dean of the Sydney College of Arts at the University of Sydney, which awarded her an honorary degree in 2000.
"Olley was a leader in that generation that brought home-grown Australian art to the rest of the world, but importantly to Australia itself.
"Although she lived to a grand old age, she never lost her relevance." 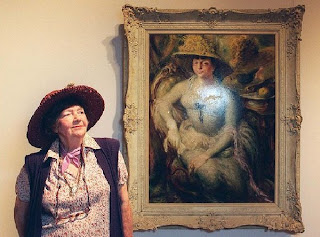 In 1948, Olley was the subject of William Dobell's 1948 Archibald prize-winner.
Attending the prize announcement for Quilty last April, she told reporters how proud she was of him. 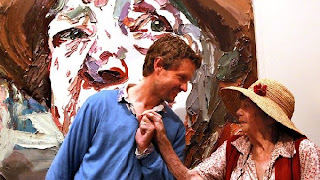 "That second Archibald Prize win meant a lot to her," Quilty said on Tuesday.
Nicky McWilliam, director of her late mother's gallery Eva Breuer Art Dealer, said Olley's death was "a real loss for Australia".
In 1991, Olley was made a Member of the Order of Australia for service as an artist and for the promotion of art.
In 2006, she was awarded Australia's highest civilian honour, the Companion of the Order, for service as one of Australia's most distinguished artists, for philanthropy to the arts and for encouragement of young and emerging artists.
"It's such a great award. I'm overawed," Olley said at the time.
"I thought just judges and just very important people got it.
"I'm not important. I just do what I want to do." 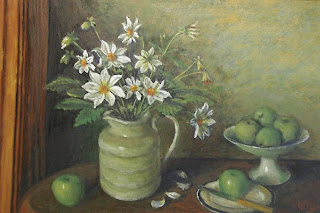 The winner of the Sunshine Coast Art Prize 2011 was announced tonight at the Caloundra Regional Gallery ... 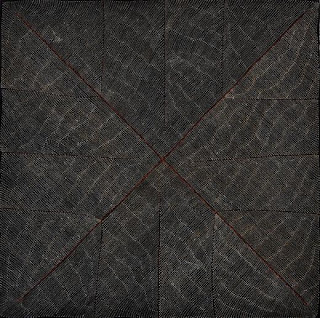 “This painting is about my culture. That’s my father’s dreaming. This is from my father’s country, that country is called “Unjangola”. That is north of Utopia, not too far but really desert country”

Margaret has been exposed to art for most her life and lived for some time at Utopia where the Utopian art movement began with batik works. She paints her fathers dreaming and the stories that she depicts include country, bush food and ceremonial designs. Her main story is the “Anatye” or bush potato dreaming which is portrayed using a series of fine, microscopic dots.

The bush potato vine grows after the rains. The women go out to collect the potato using crowbars to dig up the ground. The potatoes can grow quite large, depending on the amount of rain. Once collected they are cooked in the hot coals of the fire. They are an important source of bush food for the Anmatyerre people.

The Sunshine Coast Art Prize (SCAP) is a national acquisitive painting and 2D art prize valued at $26,000 and includes an artist residency in Maleny on the Sunshine Coast hinterland. The exhibition of forty finalists is a showcase of contemporary 2D practice by leading local and national artists. www.scap.org.auPlease call again ...

Well it is delivery time ...
for my entry in the Noosa Regional Gallery Travelling Scholarship ...  ChainMail3 ...
The piece ( and the artist ...) was selected as a finalist in this year's competition ... along with 40 other finalists from around Australia ...
ChainMail3 is one of a series I have put together over the past few months ... 17 in all ... and it is constructed with found timber, metal and hand-made paper - "rescued assemblage" as I call the process !!! ...
Judging is on 04 August - so please send some positive vibes out there into the universe for me ...

Signs of Winter Down Under

It must be mid-winter here in Australia - because my miniature Magnolia tree is now covered in the most spectacular flowers ...

Fungi on the Walk

On a recent early morning walk along the Obi Obi creek in Maleny, I cited works by our leading local artist "nature" in the leaf rubble along the track.
I wonder how many people walk past this amazing artwork every day and never notice it.

Sculpture on the Edge

Recently 10 artists from Arts Connect inc. were invited to exhibit works of sculpture in the garden of Judy and Ron van Hoff in Witta ... their garden was open to the public over the weekend as part of the Maleny Garden Club’s "Gardening on the Edge 2011". It is a beautiful garden of some five acres and opens onto a huge man-made lake - complete with 7 wild black swans ...

I was keen to be part of the event, but as my artworks are primarily "indoor", I elected to do ephemeral works ... I just wanted to play in the forest with the leaves !!!!
The day we set up was beautiful and sunny - but alas - it poured with cold rain over the weekend - howver the miserable weather didn't stop the crowds, and we estimated about 1500 people would have visited the garden over the two days ...


Barry Smith and I worked on a set of encyclopaedia laying a Path of Knowledge through the leaves.
﻿
The books are now resident in the little courtyard at my studio.
My other piece was a set of paper-mache Bubbles on the lake's edge.

﻿
﻿It's always fun to break-out of the studio occasionally and play !
Thanks for your visit - please call again ... cheers - Ken
http://www.kenmunsie.com/
Posted by Ken Munsie at Tuesday, July 05, 2011 2 comments: